John Fahey was the founding father of 'American Primitive Guitar' - a style he coined in the late fifties, breathing new life into traditional country blues fingerpicking on the avant-folk scene. Robbie Basho and Leo Kottke number among his followers, although Fahey lived much of his life in humility. At the tail end of his career in the mid-nineties, he enjoyed a mild spike in interest following a positive write-up in Spin's Alternative Record Guide and name-checks from big contemporary artists such as Sonic Youth and Cul De Sac.

During this time, living in a cheap motel in Salem, John Fahey would drive to Portland to sell unwanted promo CDs. There he met a record store clerk called Julie Shapiro at Ozone Records - one of the biggest independent stores and purveyors of Manic Panic hair dye in downtown Portland. Over the course of selling his CDs, he started a rapport with Julie, and one day, unprompted, sent her a couple of cassettes in the post with a short letter and cryptic track-listing.

Both cassettes are to be broadcast via NTS - the first cassette is available for on-demand listening below, and the second will be aired on Friday March 31st, 12:00-13:30 GMT. We spoke to Julie to ask how these tapes came around, and she kindly sent over scans of Fahey's original letters which are available for viewing below.

Julie: I was a record store clerk living in Portland Oregon, back in 1996. I worked at the Ozone Record Store which was this big, beloved shop in downtown Portland. John Fahey used to come in and sell a lot of the promos he was receiving - he’d just landed back on major record label radar and he’d sell us these incredible Jim O’ Rourke promos, things that never came in for sale… They weren’t always in great condition but we’d buy the CDs off him. Everyone in the store knew who he was and kind of worshipped him - I just started talking to him about his stuff. I was a big fan but probably wasn’t as aware of how historically significant a musician he was, so I wasn’t as intimidated. 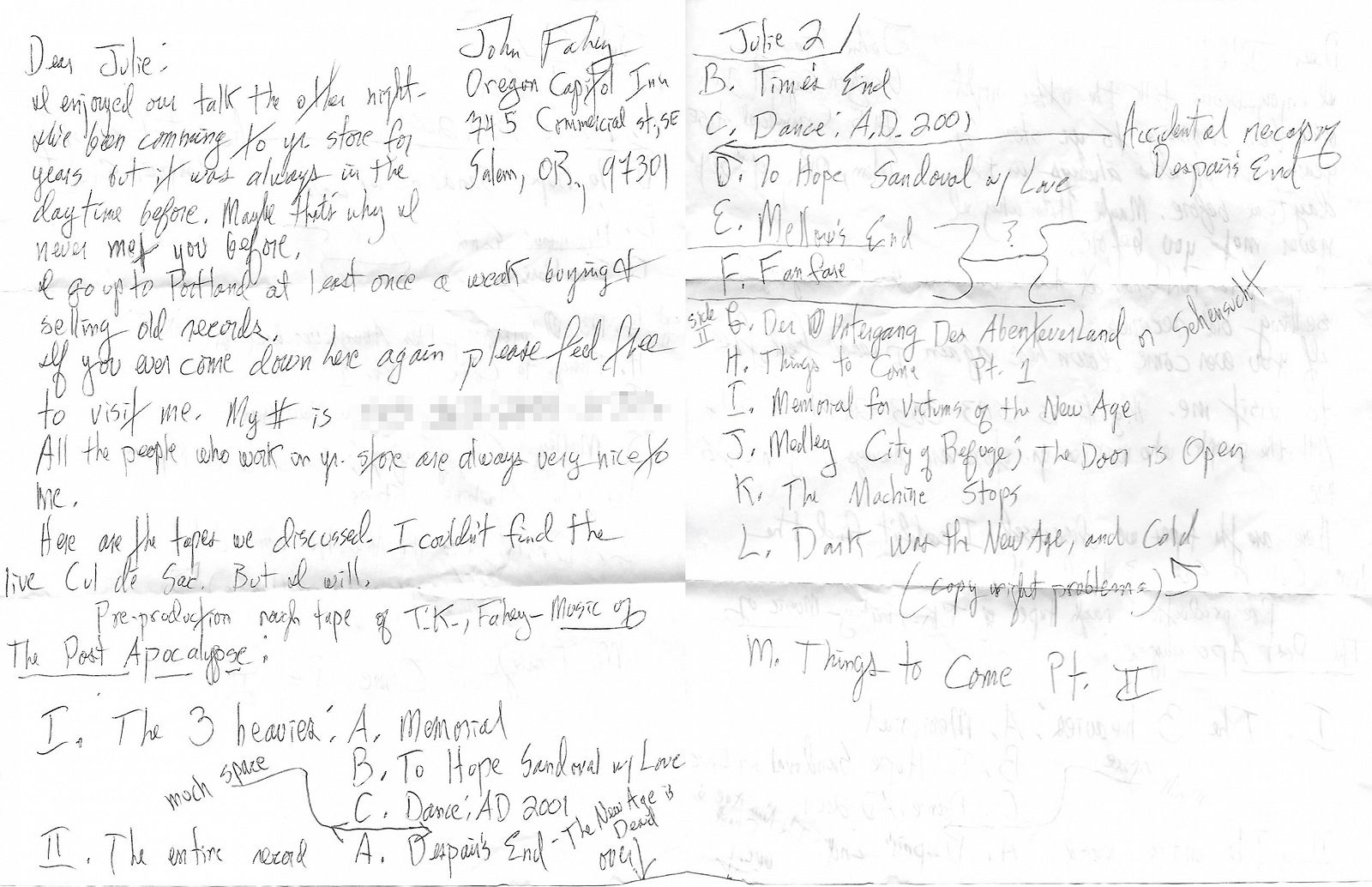 J: We talked a lot and he sent me a letter with two cassettes and a tracklisting with some information. It was a total surprise and a generous thing for him to do. The letter was postmarked May 8th 1996, Julie at Ozone. That’s how he got it to me, sent it to the store... I think he was lonely. That’s my personal take, he was at a lonely time in his life and he appreciated having someone to talk to, and I certainly appreciated getting to talk to him. Back then, that’s what you did for people you cared about, you'd make them a mixtape. I think he was just happy for for friendship and conveyed his appreciation for our connection through the tapes. Whilst including personal touches like a dig at the Orientalism of experimental group Sun City Girls, Fahey's tracklists only reveal so much. Beginnings and ends bleed together, with promotional voiceovers cut and pasted into his own original guitar recordings and experimental electronic drone pieces. Yet they capture a specific relationship struck up in passing with a welcoming face in a record store. Ozone has sadly since shut down, and Julie now works at Radiotopia, a story-driven podcasting network.