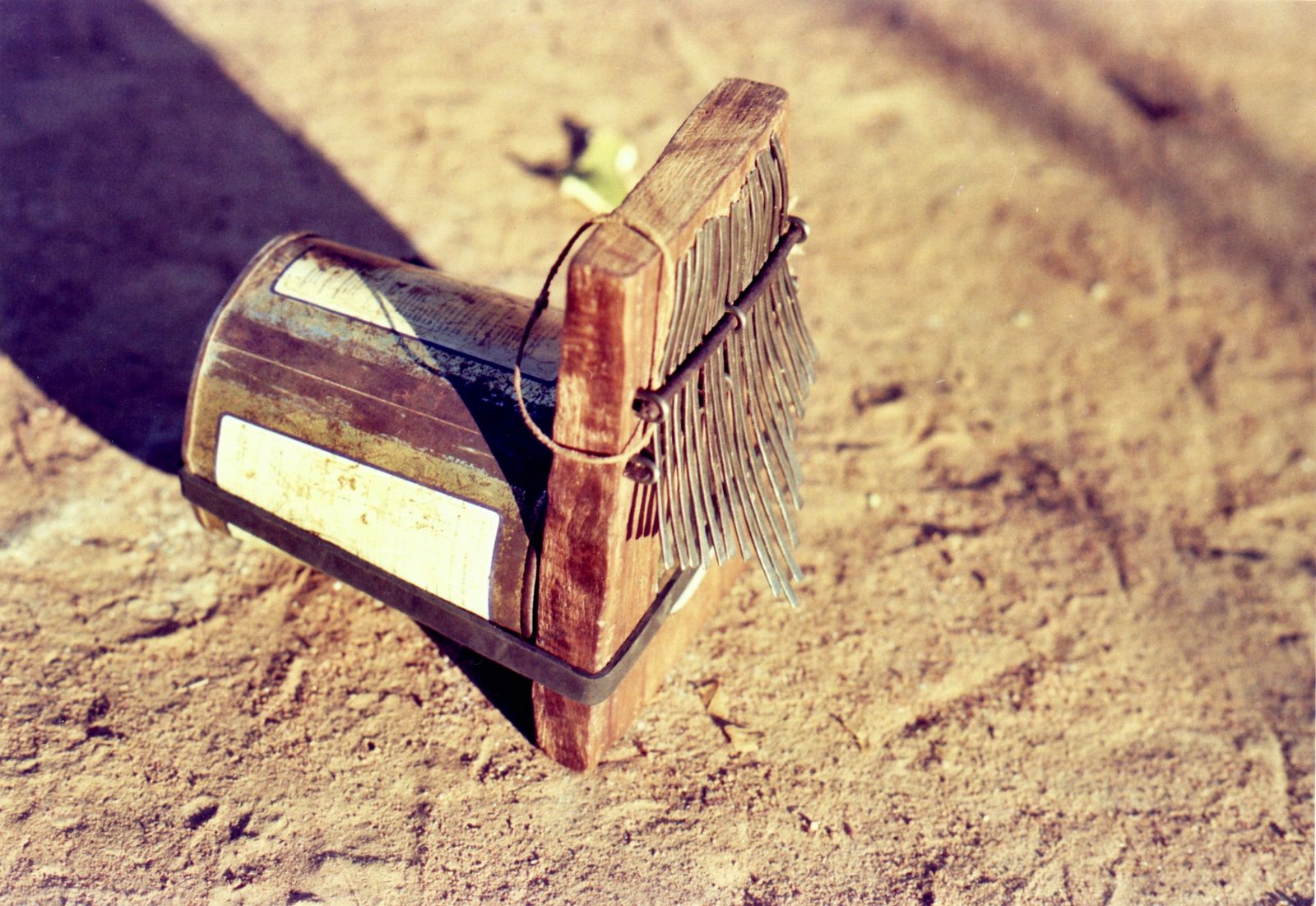 The digitisation, cataloguing and full preservation of these recordings was made possible by the Unlocking Our Sound Heritage project, funded by the National Lottery Heritage Fund.

Thanks to World and Traditional Music curators Janet Topp Fargion and Andrea Zarza Canova for their ideas and advice; to all the recordists for agreeing to have their recordings included in this programme; plus a very special thank you to all the performers, named and unnamed, who feature in these recordings. This programme is dedicated to them.

A piece describing the end of planting time and the arrival of rain. Played by Madhohu Rammutla on a dipila inherited from his father, who also taught him this piece. The dipila is a Pedi lamellophone with a variable number of metal prongs or lamellae and a soundboard made of wood. Mr Ramuttla’s dipila has 10 prongs. The piece is preceded by a short recording of the tuning of Mr Rammutla's dipila. The tuŋ is a mouth harp (also called jew’s harp or jaw harp). It consists of a simple frame with a flexible tongue, which is plucked in front of the player’s mouth for amplification. The player on this track is either Inan Pudin or Uboŋ.

Recorded by Lucy Durán in Brikama, The Gambia, in December 1978

An excerpt from a much longer performance on the Balanta kadj, a large heptatonic xylophone with gourd resonators that is played by two people at the same time. Small rattles or bells are attached to the wrists of the players. The kadj is sometimes called balo, the Mandinka word for xylophone, as the Mandinka and the Balanta have been living next to each other for a long time.

Recorded by David Hughes at Mangkunegaran Palace, Surakarta, Central Java, Indonesia, on 12 May 1990

Monggang is the name of one of the archaic gamelan sets of Mangkunegaran Palace in Surakarta, Java, and this recording is an excerpt from a longer Monggang performance held at the palace. The gamelan is a complex instrumental ensemble from Java and Bali, consisting mainly of metal gongs and bells. Drums and a few melodic instruments such as flutes and spike fiddles are often also part of a gamelan, although in this recording the melodic (also called ‘soft’) instruments are not present. The birds nesting in the gamelan hall of Mangkunegaran Palace are clearly audible in the background.

A Ju|'hoansi song played on the g!omah, a musical bow not unlike the hunting bows used by the Ju|'hoansi of Kalahari. The bow is played by hitting its string (made of metal or animal sinew) with a stick, while using a gourd or the player’s mouth as a resonator. The g!omah may be played in the evening before hunting or when returning from a successful hunt. It is also played for entertainment or for seduction (a good g!omah player is often also a good hunter, and hunting is an important source of food among the Ju|'hoansi). The instrument can also be used to imitate animals, such as the spotted hyaena (!’au) after which this song is named. On this recording, ≠oma plays the g!omah and |ui n!a'an sings.

Recorded by Peter Cloudsley in Puno, Peru, on 5 November 1983

Félix Paniagua Loza plays a tune by local composer Zacarías Puntaca. Recorded in Félix’s home, this track features the charango, a small guitar-like instrument that is widespread in the Andean regions of Peru and Bolivia. It appears that, traditionally, an armadillo’s armour was used to make the body of the charango, although most modern charangos are made of wood instead.

An excerpt from a demonstrative piece performed on a Yoruba dùndún drum set, introduced by an unidentified speaker. The individual drums in the set are named: ìyà’lù, gúdúgúdú, ìsaájú, kànàngó and kẹríkẹrì. Almost all drums in a dùndún set are variable tension drums, meaning that they can produce different pitches by altering the tension of the drumhead’s skin by means of strings attached to the drum’s body. Variable tension drums are sometimes called ‘talking drums’ (although many other drums can be made to talk) and, Yoruba being a tonal language, dùndún drums are particularly good at delivering messages in Yoruba.

Recorded by Stanley and Elizabeth Glasser in Port St. Johns near the bridge over the Mzimvubu River, Eastern Cape Province, South Africa, on 12 December 1981

A Xhosa woman plays a short piece on a musical bow by scraping a wooden stick against the bow’s string. Despite the absence of historical evidence, it is tempting to imagine that musical bows came about because of hunters idling time away with their hunting bows and arrows. 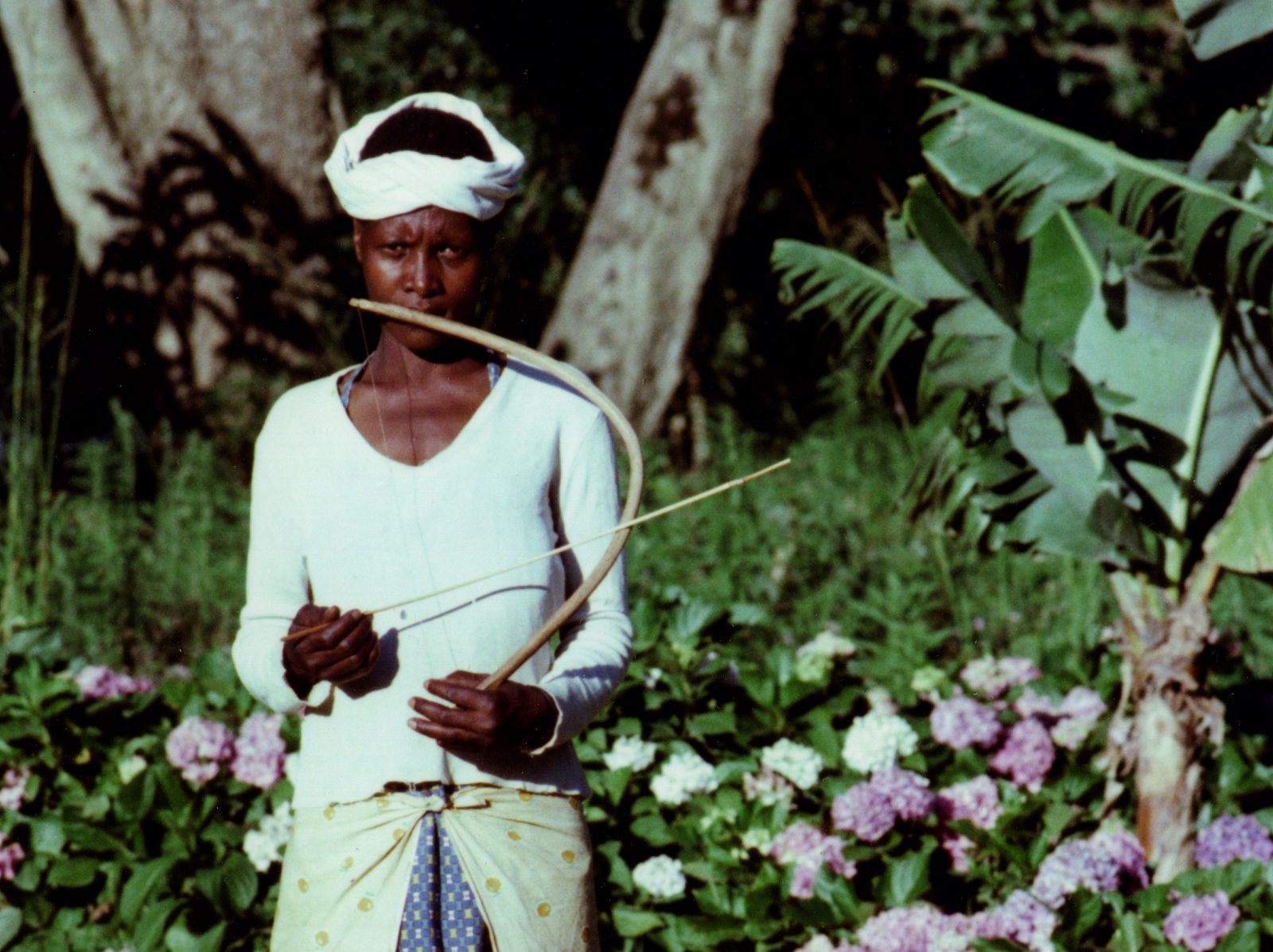 Recorded by Lucy Durán in Faraba Banta, The Gambia, in December 1978

An excerpt from an unidentified piece played on the Mandinka bolombato by Bajawo Camara. The bolombato, also known as bolon, is a low-pitched spike harp with a gourd resonator and three or four strings (four in this case) attached to a curved neck. The buzzing sound heard on this recording is produced by the nyenyemo, a thin metal plate threaded with small metal rings that is attached to the instrument's neck and vibrates sympathetically. The bolombato is traditionally associated with war and warriors.

Excerpts from two recordings of the Nama song |ai g!ai piriru. First, the song’s instrumental accompaniment is performed without any singing by a group of men playing the ≠ab flutes. In the second recording, women sing and dance accompanied by the ≠ab. The ≠ab are end-blown flutes made from papaya tree stems. Usually played in ensembles of four, known as !koam, they produce a melody and rhythm by alternating notes and silences between them. Recorded by Stanley and Elizabeth Glasser in Cele, on the way to Upper Hlabati, Eastern Cape Province, South Africa, on 3 January 1982

Another medley of two recordings made in short succession. First, a Xhosa woman sings a song while playing the uhadi, a struck musical bow with a gourd resonator. On the second recording, she is joined by a group of singers who clap and respond to the woman’s singing. 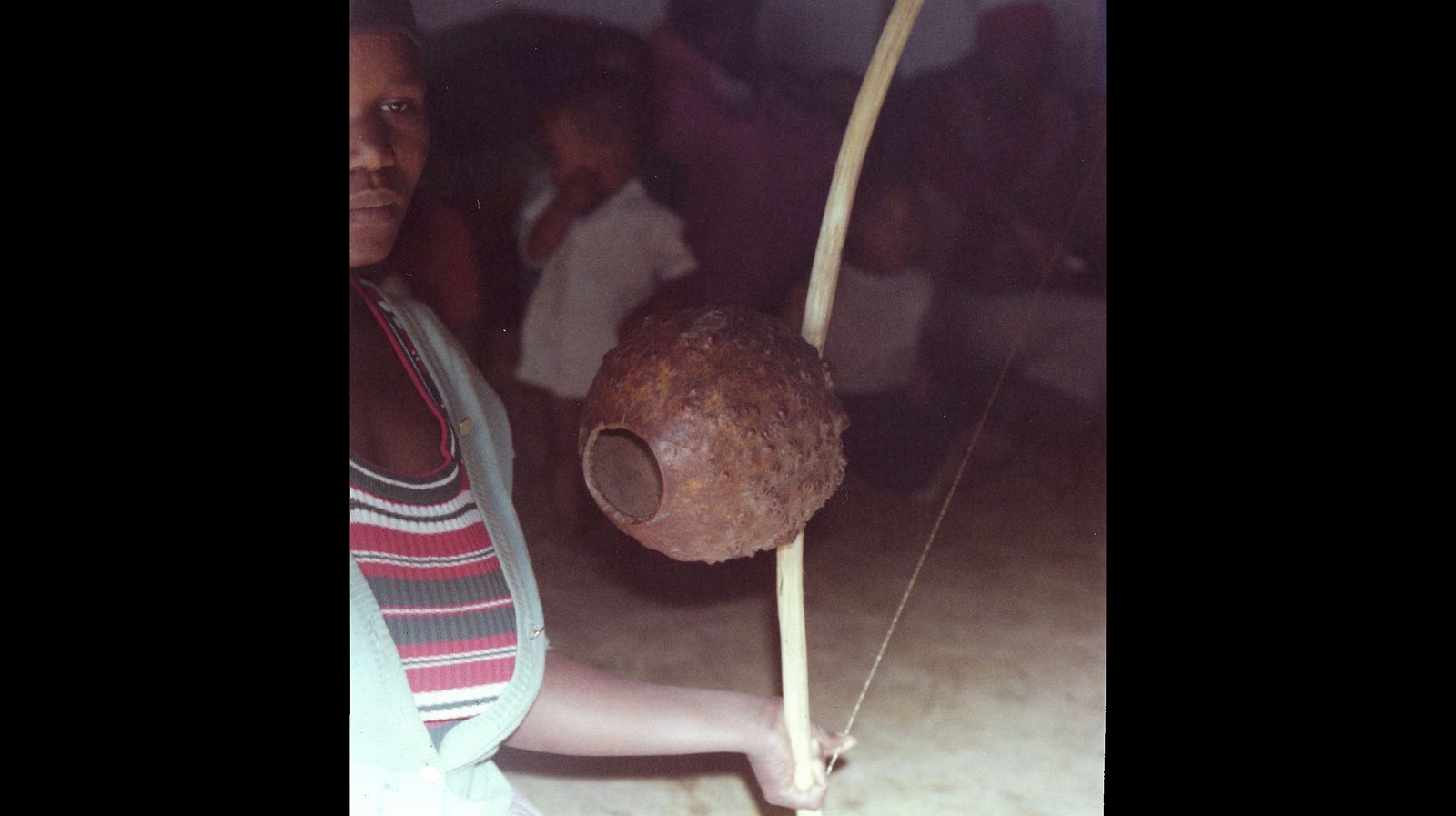 The xalam is a small, five-stringed plucked lute of the Wolof-speaking people of Senegal and The Gambia. It has a boat-shaped resonator carved from a single piece of hardwood, with cow skin stretched across it and nailed to the back of the instrument. The instrument's neck is cylindrical and fretless, and it pierces the resonator's skin. Of the xalam's five strings, only two are stopped with the left hand, although all five are used to play a melody. The xalam belongs to a wide family of West African lutes such as the kontingo, ngoni, and hoddu (some people have speculated that these may be the ancestors of the North American banjo). Hammadi Sosse was a xalam player from Medina Sabax, performing mostly for local patrons. In this excerpt from a longer recording, he plays a piece telling the story of a jinn (spirit) named Manga Yira, who became the lover of the sister of Sunjata Keita, the 13th-century founder of the Mali Empire.

An unidentified musician playing the capeʔ or sape’ (also spelled sapeh or sapek), a long lute played by the Kajaman and Sekapan people of northeastern Sarawak, Borneo, as well as by other neighbouring people. The body of the capeʔ is carved from a single piece of wood and is often adorned with elaborate decorations.

A recording of the Ju|'hoansi song !ai g/a !ua (‘dead - eyes - tear'). |xam and ≠oma sing, and ≠oma also plays the dùngò, a lamellophone with metal prongs (the Ju|'hoansi call them tzàùsì, ‘teeth’) and a soundboard made of wood. The sound of the dùngò can be quite significant: “When the sound is pleasant, something happy will happen; when the sound is unpleasant (or when it is difficult to tune it) something bad is happening in the distant family” (quoted from a report on the musical instruments of the area, written by M. Mans and E. Olivier and published in 2005).

A song in Xhosa language with guitar accompaniment. Modern, versatile, portable and relatively cheap, during the last century the guitar was adopted by musicians all over the world as an instrument of choice, and it could be argued that nowhere more than in Africa was the instrument’s diffusion so far-reaching.

Rafael Achomccaray Quispe plays an instrumental piece inspired by the Ollantay drama, a Quechua play telling the story of the Inca army general Ollantay. The piece was recorded in Rafael’s house in San Jeronimo, near Cusco, Peru, and performed on the pampapiano, a foldable pedal-pumped reed organ. These instruments were first brought to the Andean regions of Peru by the Europeans, to provide the newly-built churches of those remote communities with music. Later on, as grander organs were brought into the churches, those earlier, smaller models were gradually dismissed. They were, however, adopted by the local population, who started using them outside the church to play religious music but also secular local styles. It was then that this locally-repurposed instrument got its new name. The melodio, as it was known in Spanish, became the pampapiano, from the Quechua word pampa, which means ‘land’ but also ‘ground’ and ‘floor’. Having left the church, the pampapiano could be played almost anywhere in the land. You just had to place it on the ground and start pedalling. Intriguingly, Rafael’s pampapiano carried a plaque that read: Piano made by Stevens, Kentish Town, London NW5. Batá drumming and singing in the house of Cuban rumbero Ricardo "Papín" Abreu, featuring Papín, Elio Revé (founder of influential band Orquesta Revé) and a student referred to only as Orlando. The Afro-Cuban batá drums are played in a set of three, with their individual names being iyá (the mother drum and leader of the ensemble), itótele and okónkolo. They are the direct descendants of the Yoruba batà from Nigeria and are strongly associated with the Yoruba-derived Afro-Cuban religion Santería (also known as Regla de Ocha or Regla de Ifá). In order to be played during a religious ceremony, the drums need to be consecrated, after which they receive a name, acquire spiritual powers and cannot be played or even touched by the uninitiated. However, batà drums that haven’t been consecrated, like the ones in this recording, may be played outside of religious settings. This track, consisting of excerpts from a longer recording, was recorded during a rum-fuelled music session held in the middle of the night while a thunderstorm was raging outside. Appropriately, the track ends with praise singing for Changò, the Santería deity associated with thunder and lightning.

Gabriel Aragón plays his own composition Agosto wayra on a large Andean harp. The harp, another European import not unlike the pampapiano, has over time become a major instrument of Andean music. Andean harps vary in size across the region, with the Arpa Cusqueña (the harp from Cusco region) being the biggest, with up to eight holes in the instrument’s body.

Recorded by Lucy Durán in Kembujeh, near Brikama, The Gambia, on 31 December 1976

The kora is a West African spike harp with a gourd resonator and 21 strings divided into two parallel planes. It is one of the main instruments associated with jelis (also called jalis or griots), the hereditary professional musicians, singers and oral historians of the Mande cultural area in West Africa. Amadu Bansang Jobarteh was a Gambian jali widely recognised for his mastery of the kora.