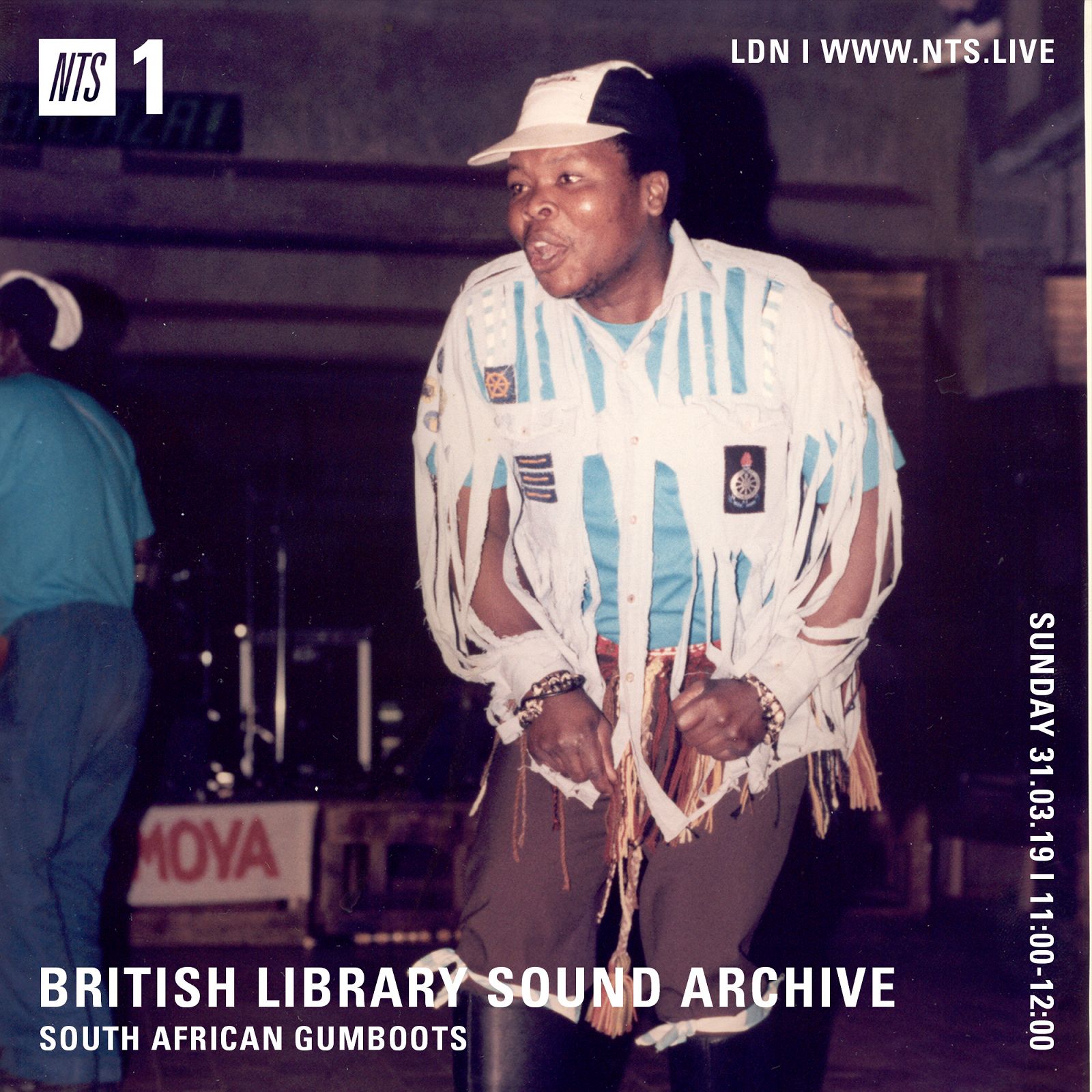 Selection by Janet Topp Fargion and mix by Andrea Zarza Canova. The programme stems from research conducted between 1984 and 1999 by Janet and Carol Ann Muller in South Africa with a gumboot team based in Durban and led by Blanket Mkhize and Steven Shelembe. Broadcast via NTS on 31st March, 11:00am-12:00pm GMT.

After decades of struggle against the South African apartheid regime, the first democratic election was held in South Africa on 27 April 1994. For the first time, all races – Black, mixed race, Indian and white – went to the polls and ushered in a government of majority choice headed up by the African National Congress with Nelson Mandela as President. In many ways the struggle was an international one in which certain artists and art forms became recognised as emblematic of the country’s identity. 25 years after the historic event, this programme presents the story of the gumboot dance in the context of such musical emblems. 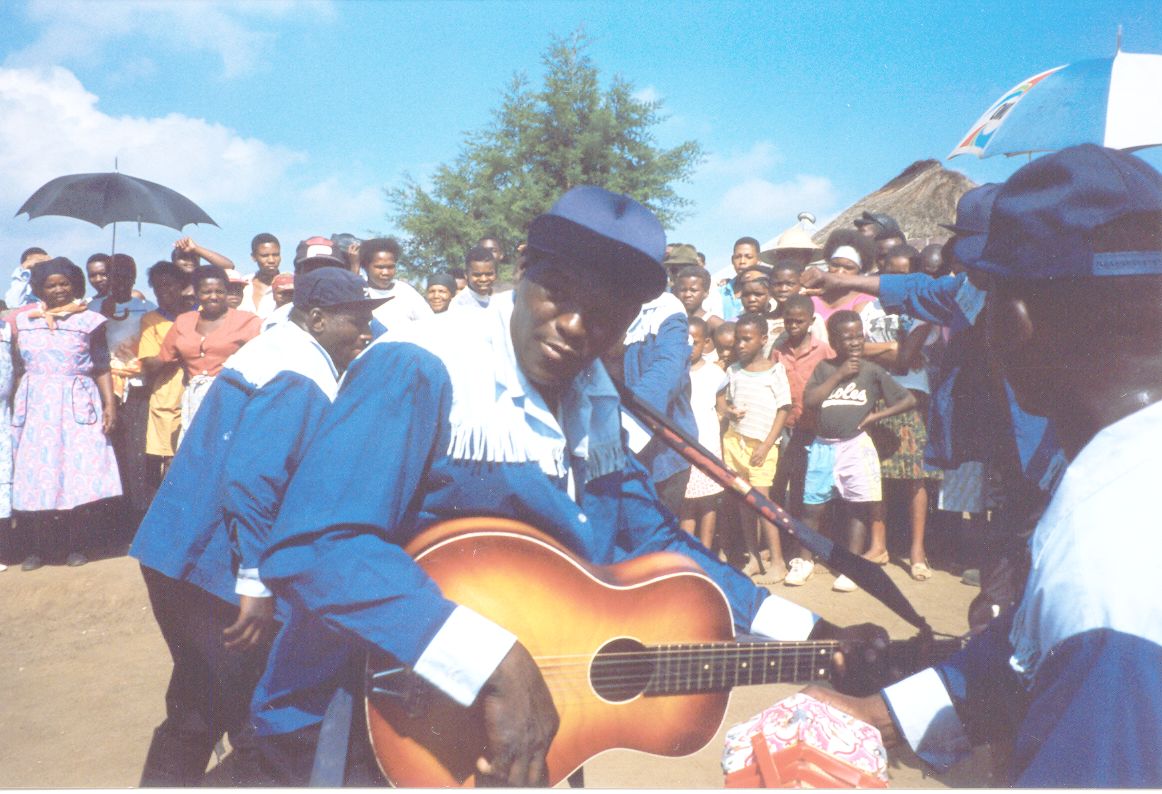 “Gumboot dance is a cultural form that has been powerfully shaped by migrant experience in the South African mines through the course of the 20th Century. Initially attributed to the amaBhaca people of southern KwaZulu-Natal, it came to be performed by a variety of workers, regardless of [ethnic], racial or linguistic affiliation.” (Topp Fargion and Muller, 1999, p107)

Drawing on a wide range of influences, including traditional dance as well as musical practices emerging from early mission stations, miners on the gold mines in Johannesburg developed the gumboot dance during leisure hours in the early 20th Century. The dance spread to other areas of the country as workers travelled to and from their homes and later to other industrial areas, such as the docks in Durban. Much of this travel was done on trains.

Wearing thick rubber boots (Wellingtons, or gumboots as they are known in South Africa), teams of men execute rehearsed dance sequences – Nasi salutho (We salute); Amaphoyisa (Police); Abelungu (White people) – in strict unison as the leader calls them out. The sequences are either unaccompanied or are danced to one or more instruments including guitar, concertina, piano accordion and violin. Although gumboot is a dance style and thus highly visual, dancers ‘play’ gumboots like musical instruments. They are padded to increase the resonance and players learn to hit and stamp the boots in order to create the best sound.

Gumboot dance, amidst other mine dances such as the Chopi timbila xylophone dances, was developed in the context of a turbulent political environment, with the African National Congress (ANC) being founded in 1912, initially as the South African Native National Congress (SANNC) and renamed the ANC in 1923. It burgeoned concurrently with the growth of an urban Black community who were musically expressive in various township jive and jazz styles in the 1940s–‘60s. The plight of Black South Africans through the apartheid era was effectively highlighted on an international scale through musicals, pop music collaborations and films. Gumboot is referenced throughout.

[Note: although gumboot is a dance style and thus highly visual, dancers ‘play’ gumboots like musical instruments. They are padded to increase the resonance and players learn to hit and stamp the boots in order to create the best sound.]

Sol Plaatje was a founding member of the ANC. This hymn was written in 1897 by Enoch Sontonga who was a teacher on a Methodist mission school close to Johannesburg. By 1925 the hymn was established as the ANC’s anthem, an organisation banned by the apartheid regime from 1960 to 1990. Even on this disc, published in 1923, the song is not listed on the centre label. As far as is known, this is the first recording of this hymn, made in London on 16 October 1923. This was during the last of several international trips that Plaatje embarked on in which he presented the ANC’s case of protest against the Natives Land Act of 1913, legislation brought in by the South African government that removed the right of Black South Africans to own land.

For more information about this recording see Flat International. 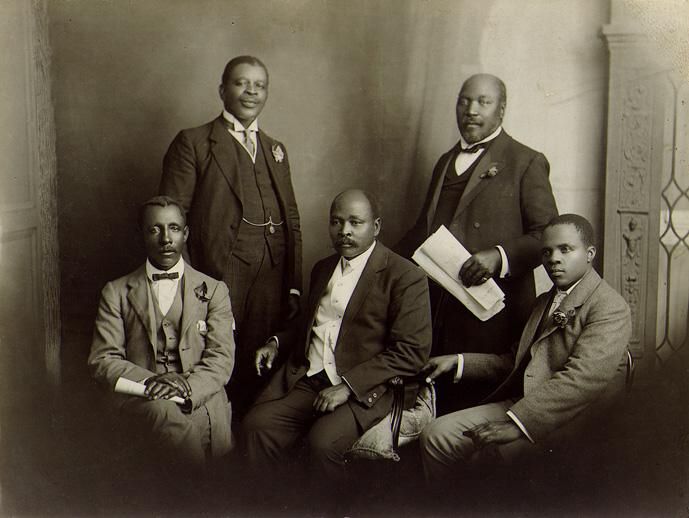 Gumboots, written and conceived by Rishile Gumboot Dancers of Soweto and Zenzi Mbuli, was a London West End hit in 1999. Emerging from a community theatre group in Soweto, the performance tells the story of the development of the gumboot dance and the hardships the migrant workers endured. This track conjures up the image of the train bringing new workers from around the country to work on the gold mines in Johannesburg.

Chopi musicians recorded at the City Deep gold mine in Johannesburg, 1930. The Chopi are an ethnic group originally from Mozambique. Miners came from all over South Africa and neighbouring countries to find work on the mines. Mine dances were organised for entertainment on the mines.

Gumboot was a popular dance performed on the mines in these contexts. The dance was originally performed by Bhaca miners, originally from the southern KwaZulu-Natal and the eastern Cape. The leader’s role is to call the dance sequences, to inject energy and, often, to create humour. 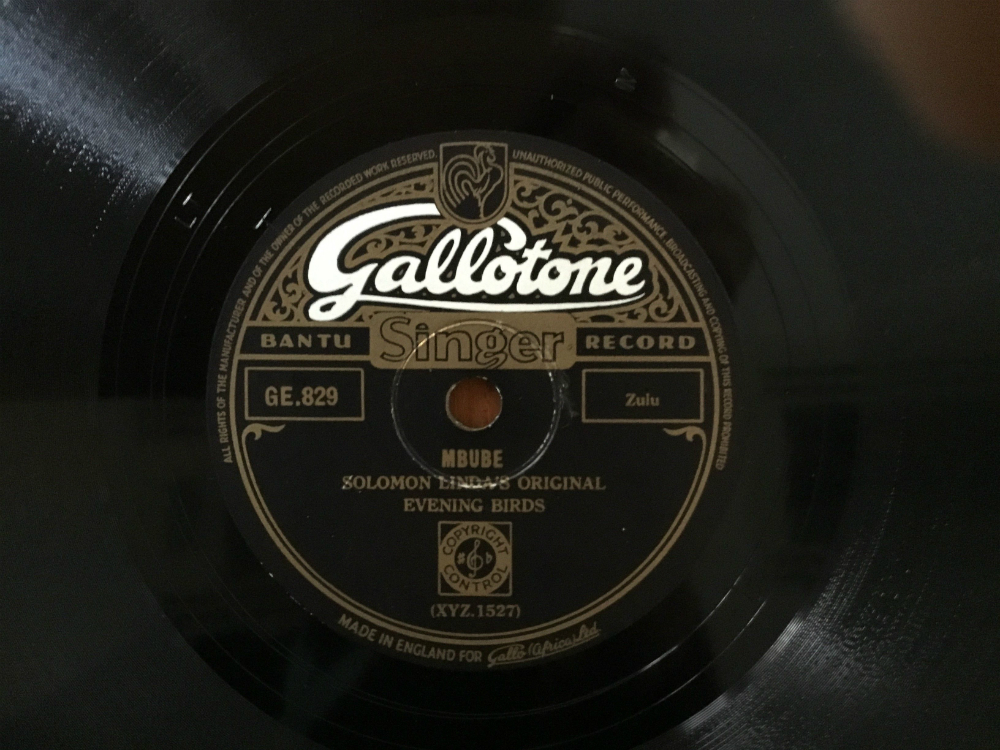 Close up of disc label of Gallotone GE 829, featuring Mbube by Solomon Linda.

Solomon Ntsele, known as Solomon Linda (1909-1962) was a South African musician best known for this piece called Mbube, which he recorded for Gallo while he was working in their offices as a cleaner having come from his home in KwaZulu-Natal to look for work near the prosperous gold mines. The song was picked up by Pete Seeger and The Weavers who recorded it as Wimoweh in 1951. The song reached number 1 in the United States in 1961 in its incarnation as The lion sleeps tonight by The Tokens. Today it is perhaps best known for its use in the Walt Disney animated musical, The Lion King (1994).

Mbube (meaning lion in isiZulu) came to be used to refer to the unaccompanied style of singing that developed amongst migrant workers in South Africa, many living in the same environments as the gumboot dancers. The later name for the genre, isicathamiya, is best known internationally through the music of Ladysmith Black Mambazo. –cathama means ‘to walk like a cat’ and refers to the dance style executed quietly on tiptoes, used in performance. Some say this was developed so as not to wake the white man.

The new styles emerging on the gold mines dispersed around the country as migrant workers travelled back to their homes.

This is a version of a traditional Xhosa song, sung normally at weddings to bring good luck and prosperity. It refers literally to a kind of beetle that knocks its abdomen on the ground making a knocking sound. Miriam Makeba began singing professionally in the 1950s with South African township jazz groups such as The Manhattan Brothers and The Skylarks. Under the mentorship of Harry Belafonte she rose to fame in the United States and internationally. She was a fervent anti-apartheid activist who was instrumental in bringing South African music to an international market but also in speaking out in opposition to the atrocities taking place against Black Africans in South Africa.

King Kong was a ‘jazz opera’ with music by Todd Matshikiza and lyrics by Pat Williams. It was first performed, with Nelson Mandela apparently in the audience, in Johannesburg in 1959. It came to London’s West End in 1961 with many of the original cast, Including Miriam Makeba. With the inclusion of this gumboot track we see the emergence of the style as a true emblem of the Black workers in South Africa.

Portable instruments like the concertina and guitar became popular amongst migrant workers – they could be easily transported between home and work. More importantly perhaps, they were found to be easy to adapt to traditional musical forms and concepts. The concertina was one such instrument that could be played while walking from place to place, in a personal and intimate way. Sometimes replaced with the loader piano accordion and together with guitar these instruments came to form the basis of a new genre, maskanda, sometimes known as ‘Zulu blues’, telling the stories of everyday lives of Zulu migrant workers. This ensemble is often used to accompany gumboot dancing, having come out of the same social and political milieu.

The burst of fast spoken phrases are common in maskanda music, in which the performer tells something of their story and exposes their own identity.

Listen to more from the Kevin Volans collection via the British Library.

Simon was given a cassette of South African township music, including a track called ‘gumboots’ by the Boyoyo Boys. His enthusiasm ended with one of his most successful albums, the collaborative, the controversial, Graceland. With its use of accordion and guitars, a driving rhythm, repetitive I, IV, V harmonies the track highlights the gumboot sound.

Cry Freedom was directed by Richard Attenborough with music by George Fenton and Jonas Gwangwa. Set in the 1970s it tells the story of liberation fighter Steve Biko and his white journalist friend Donald Woods. Gumboot is used to signify Black South African workers. 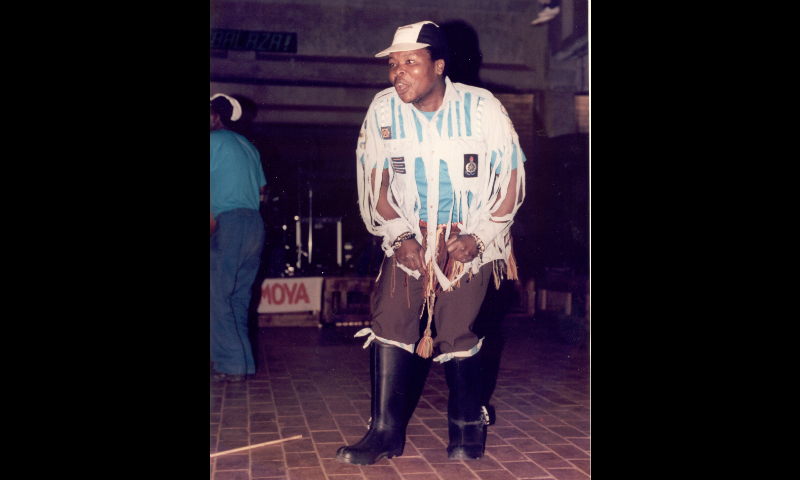 Gumboot player, team leader and guitarist, Blanket Mkhize, performs this personal, contemplative song in the spirit of ‘Zulu blues’. The song is about experiences with the police and life’s hardships. He wishes to take a plane (ibhanoyi) and fly away back to his homeland.

Blanket was a dedicated gumboot dancer always enthusiastic to keep gumboot alive by teaching new people. Before he died in the late 1990s he’d taught all his children to play gumboot to a high level. 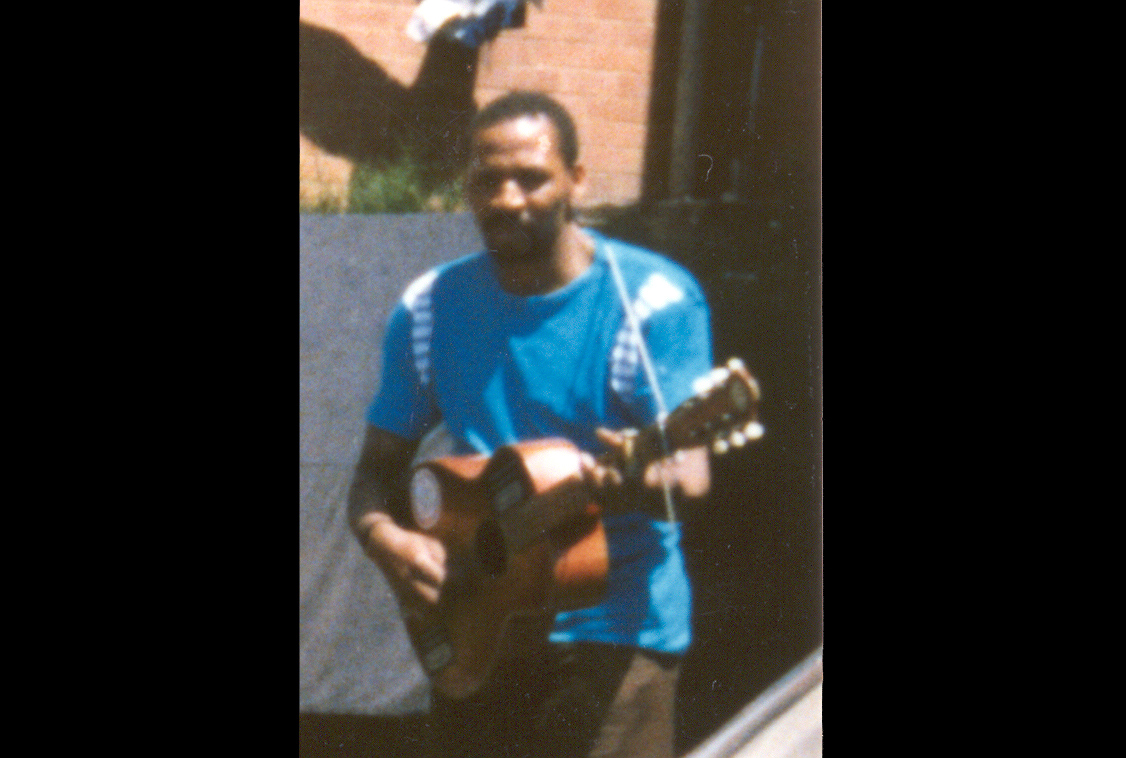 Albert Nene was a good friend of Blanket’s, living in the same male hostel area just outside Durban and working in construction lines in factories in the city. Albert was an incredible guitarist – a ‘champion’ as his friends called him. In this recording he took Blanket’s ghettoblaster one day and set it to record while he played, losing himself in first the ukupika (picking style) and moving onto the ukuvamba (strumming) style of gumboot guitar playing.

Based in Grahamstown, South Africa, this group of young gumboot dancers spring from a youth club called President’s Award. They played frequently for Mandela at various official functions. Losing the guitars, concertinas and accordions for a more hip or street sound, the President’s Award Gumboot Dancers represented South Africa at the South African Music Village in London in 1996. This was an optimistic time for the country, and for these young men who were taking gumboot dancing to schools and clubs around South Africa and looking at ways to bring in other township sounds such as kwaito.