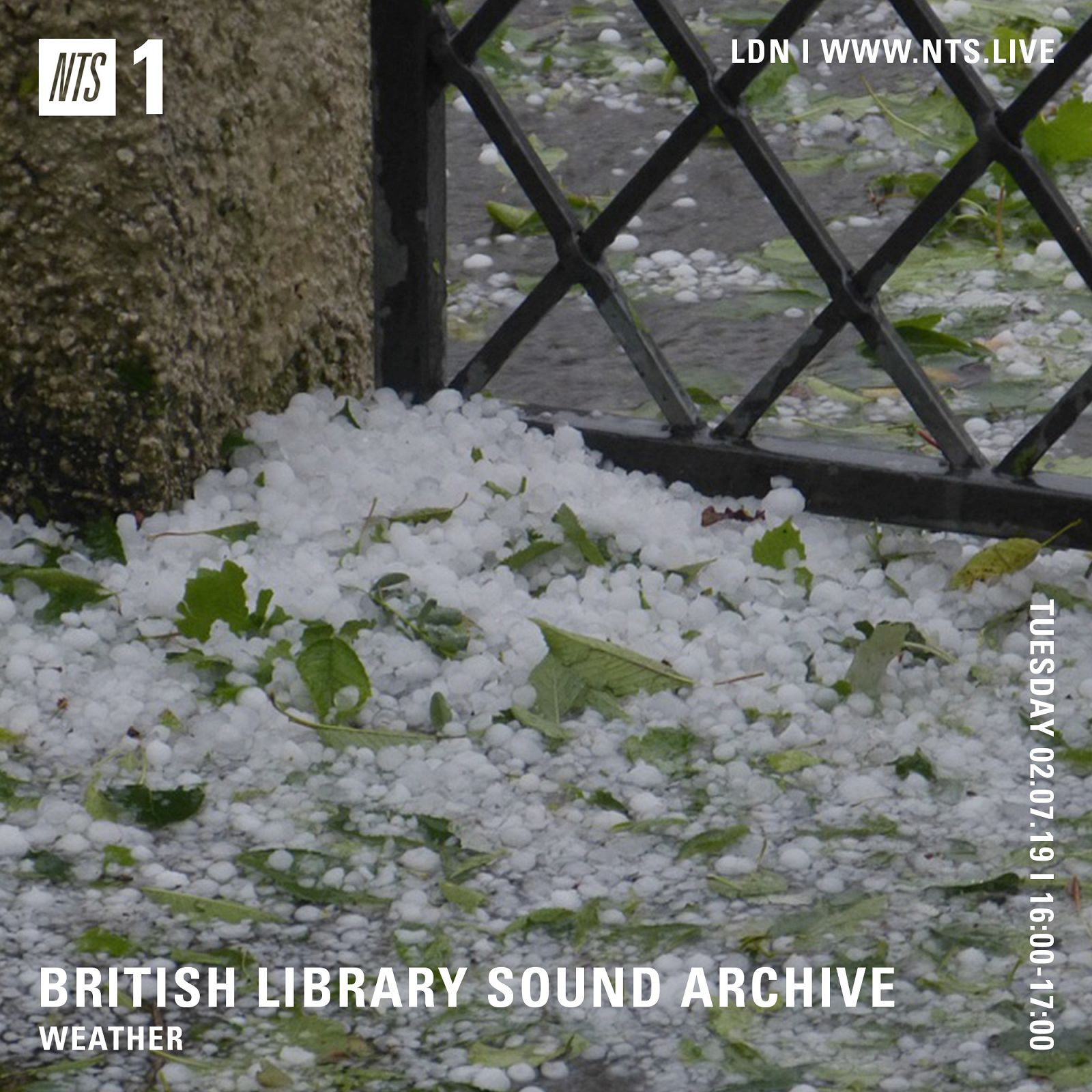 Selection and mix by Cheryl Tipp, Curator of Wildlife and Environmental Sounds.

From gentle rain falling over Australia’s Iron Range to a gale whipping up the English Channel, this selection of field recordings brings together the sounds of weather from all over the world.

These examples have been drawn from the library’s extensive collection of over 250,000 wildlife and environmental recordings that cover all sound-producing animals and habitats from across the world. Some of these recordings have been digitised as part of Unlocking our Sound Heritage, a major preservation and access project supported by a £9.5 m National Lottery grant.

As ever, many thanks go to all the recordists for agreeing to have their recordings shared on NTS.

Dawn chorus with rain under tin shed roof, recorded by Jez riley French in Uppsala, Sweden on 11 May 2012

An early morning rain storm takes centre stage in this recording of a springtime dawn chorus. The gentle pitter patter of raindrops falling onto a tin roof is accompanied by the energetic voices of local songbirds welcoming in the new day.

Creaking tree in gale, recorded by Simon Elliott in Northumberland, England on 27 December 2003

All of us will have seen the havoc that gales can wreak on the landscape, from torn off roofs to uprooted trees. The tree in this recording seems to be faring well despite the unrelenting force of a gale sweeping through the woodland; it creaks and bends but refuses to break.

Footsteps in snow, recorded by Phil Riddett in Kent, England on 2 February 2009

There's nothing quite like the sound of walking through freshly fallen snow. This particular recording was made in the Kentish village of Knockholt, just before midnight on the 2nd February 2009. This signalled the start of a prolonged period of heavy snowfall that was to see most of the British Isles grind to a halt, forcing schools, railway lines and even airports to close because of the treacherous conditions.

Metal fence in wind and snow, recorded by Peter Toll in Norfolk, England on 11 March 2013

This contact microphone recording was made in the grounds of the ruined mediaeval monastery of St Benet’s, found deep in the Norfolk Broads. The crackle of snowflakes landing on a metal fence create a delicate contrast to the vibrating tones of individual railings moving in the wind.

Hailstorm, recorded by Richard Beard in London, England on 12 April 2012

The formation of hail occurs when water droplets become trapped in the violent updrafts of thunderstorm clouds. As the droplets are carried ever higher, the water molecules begin to freeze, creating pellets of ice that fall from the sky when their weight becomes too much for the cloud to carry. This particular recording was made in a back garden in North London during the height of the ‘April Showers’ season.

Wind whistling through door, recorded by Simon Elliott on the Isle of Mull, Scotland on 23 February 2001

You’d be forgiven for reaching for your cardi when listening to this recording of wind whistling through a door. Though the wind dominates, the sounds of nearby birds can occasionally be heard. Unfortunately they do nothing to warm the chilly atmosphere.

Rain over the Iron Range, recorded by Tony Baylis in Queensland, Australia on 24 November 2005

The early morning enthusiasm of this Australian dawn chorus doesn’t appear to have been dampened by the weather. Birds such as the Black Butcherbird (Melloria quoyi) and White-faced Robin (Tregellasia leucops) continue to sing unbridled as the rain falls over Queensland’s Iron Range National Park.

Sea in a gale, recorded by Richard Beard on the Isle of Wight, England on 18 December 2014

Just before Christmas 2014, recordist Richard Beard braved the elements to record the sound of a gale battering the beach of Freshwater Bay. The waves roar, splash and hiss as the wind carries them crashing onto the awaiting beach, creating a recording that is full of movement.

Wind in yacht rigging, recorded by Richard Beard in Strathclyde, Scotland on 13 September 2007

Wind is usually the bane of a sound recordist’s life and can ruin an otherwise perfect recording. Thankfully, this atmospheric recording of Scotland’s Largs Harbour is only improved by the presence of the wind. An eerie chiming rises from the harbour as the wind whistles through the rigging of the moored yachts.

Established in 1924, Kafue National Park is one of the oldest and largest national parks in Africa. From antelope and big cats to hundreds of species of birds, Kafue is brimming with diversity. This recording of a thunderstorm rumbling across the park creates a moody soundscape. Though a few birds continue to sing, most residents of the park seem content to just sit out the storm.

Crows and wind, recorded by Richard Margoschis in Gloucestershire, England on 7 December 1974

As dusk falls, a blustery wind begins to blow through the wooded valley of Woodchester Park. A pair of Carrion Crows perched in a tree cry out as more individuals begin to arrive. After much calling and flying around, the group leave to find their final resting place for the night.

This recording was made in the tropical rainforest of Peru’s Tambopata National Reserve. Tiny, liquid explosions occur as the warm rain strikes any leaves that stands in its path. The broken raindrops then trickle down into puddles on the forest floor.

Thunderstorm, recorded by Simon Elliott in Tyne and Wear, England on 5 August 2012

Our mix ends with a summer thunderstorm in the north of England. Thunder is another notoriously difficult subject to record. The sheer power of a thunderclap can often overload a microphone, causing the sound to distort. With some skill, good equipment, and a little bit of luck, the beauty of a thunderstorm can be immortalised in sound.