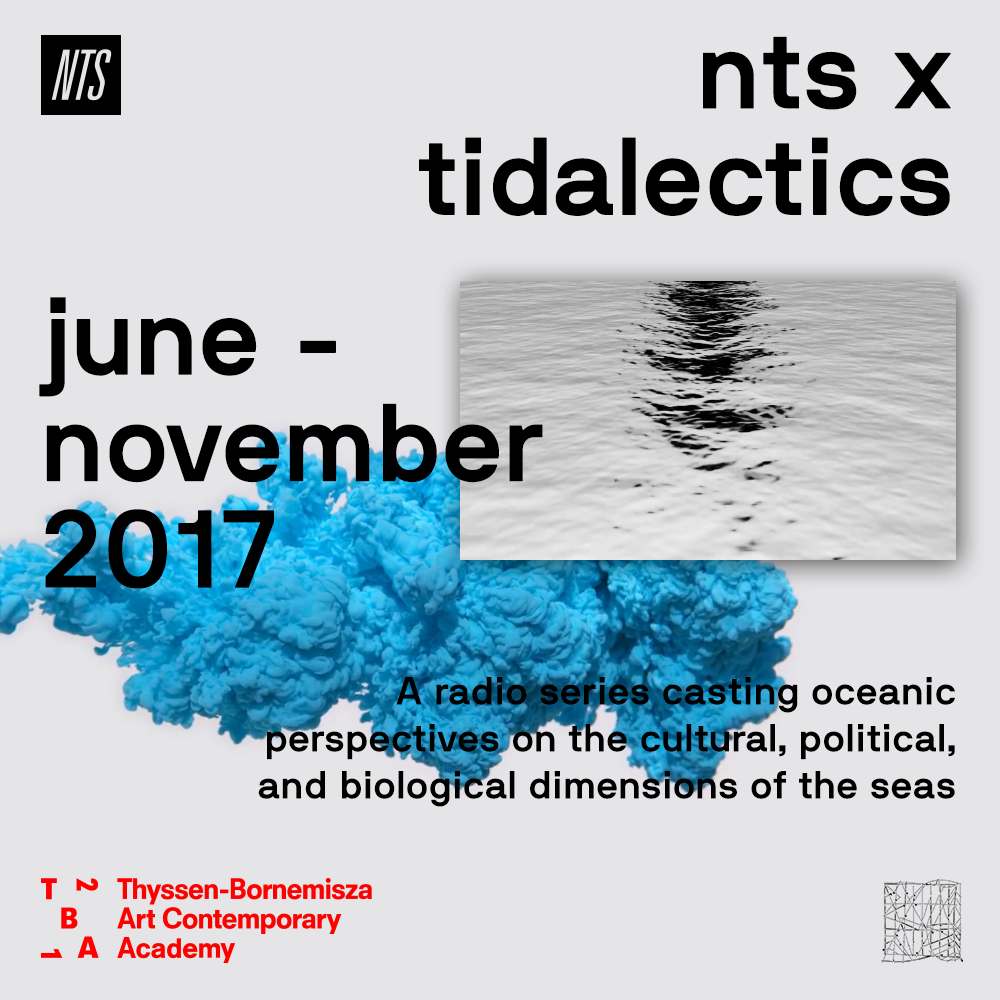 Tidalectics is an experiment to formulate an oceanic worldview, a different way of engaging with the oceans and the world we inhabit. Unbound by land-based modes of thinking and living, the exhibition is reflective of the rhythmic fluidity of water and the incessant swelling and receding of the tides. Tidalectics emerges from the Thyssen-Bornemisza Art Contemporary (TBA21)–Academy, a site of cultural production without a fixed locale, moving aboard the Dardanella research vessel, temporarily inhabited by artists, scientists, and other thinkers and practitioners. Since 2011, the Academy’s programme is entirely dedicated to fostering engaged ways of caring for the oceans. If our thoughts and actions as mostly land-dwelling humans fail to grasp these vast bodies of water that cover two thirds of our planet, let alone take care of them, perhaps it is time to consider other, oceanic, ways of being. Tidalectics sets out to do exactly that.

The exhibition takes its title from a play on words by the celebrated Barbadian poet and historian Kamau Braithwaite. With Tidalectics, Brathwaite crystallizes our terrestrial “obsession for fixity, assuredness, and appropriation” (Franco Cassano) and mirrors instead the fluctuating rhythmic soundings of the waves at sea and their curling ripples as they wash onto the shores. If dialectics is the way that “Western philosophy has assumed people’s lives should be,” (Brathwaite) then Tidalectics delves into deeper layers of meaning, involving a range of different readings and interpretations—for water is a transitory element, and a “being dedicated to water is a being in flux” (Gaston Bachelard). Brathwaite’s poetry radiates with music and rhythm. It is crafted on “riddims” that are deeply rooted in (post-)colonial anger and hope. A key thinker of creolization, Brathwaite makes us aware that hybridization is not restricted to land, but begins in maritime spaces and at the coast. Just like navigators who land at a new shore, bringing with them their living and constantly shifting stories, myths, and beliefs, the concept of Tidalectics can migrate from its original context in Brathwaite’s writing to other geographies and realms. The exhibition carefully transfers the term, mindful not to obscure its specificity but considering the notion as starting point for an oceanic worldview.

The exhibition is an attempt to liquefy our ways of being, to turn to and immerse ourselves—even if we stay dry for now—in the water covering our planet, where movement and flux prevail over static halts. Tidalectics merges the anchored with the itinerant and moves back and forth between being waterborne and touching land. It seeks to comprehend our histories as trajectories tossed by waves, from ocean crossings to systems of exchange, myths, and microbial origins.

Each of the artists in the exhibition engage in their own particular ways with the diverse questions emerging from the archipelago of cultural, political, and biological predicaments. Tidalectics is about poiesis, creation, and unresolved processes taking place before the eyes of the viewers. It mirrors the experimental methods of work of the Academy, in which open-ended situations and collaborative modes are incited to create new ways of being and knowing. As our world is becoming more oceanic—or, more precisely, as the Oceanian awareness of the significance of the waters for our history and future is streaming out to other geographies—we are becoming more receptive to the liquid dimensions of our being. Tidalectics offers us the tools to think through the dissolving notions of time and space, the blurring divisions between land and water, contemporaneity and history, science and poetics as well as the coalescing human and more-than-human relationships—and to dive together into the sea of possible futures.