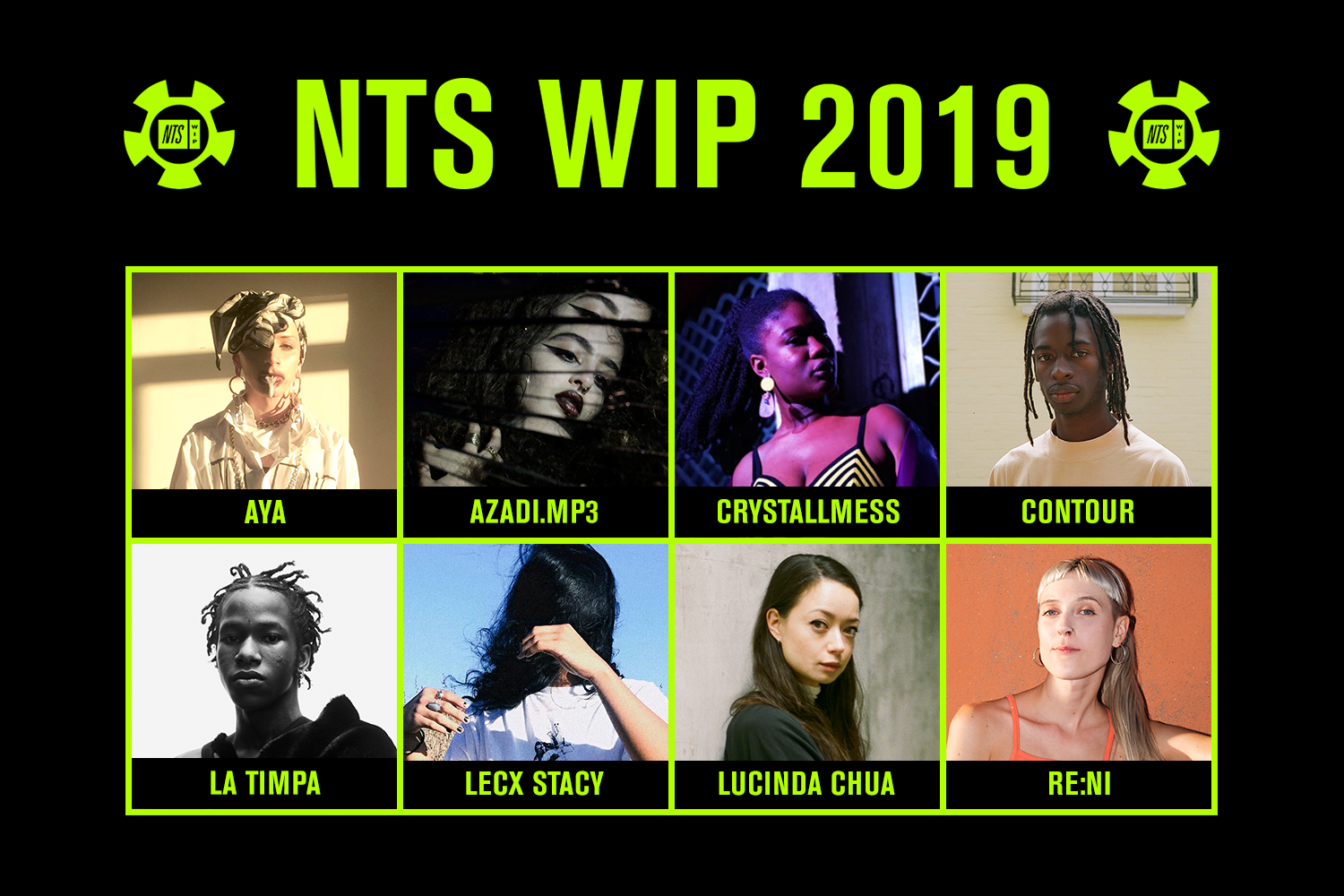 Check out what happened on NTS WIP 2019

AYA is an actual human from the actual Pennines that has taken residence in Manchester. Her work is primarily concerned with the transfigurative power of experience and memory on the physical body. She done put out them tunes with Tri Angle, Astral Plane Recordings and Wisdom Teeth . She is officially her mum’s favourite DJ and unofficially the 9th worst DJ in the Greater Manchester Metropolitan Area. Her favourite breed of dog is a whippet and she looks forward to just having a nice quiet cuppa once all this music stuff’s blown over.

AZADI.mp3 is a London based producer and singer who uses atmospheric soundscapes and densely textured visuals to explore moments of grace and failure. Her musical education was shaped by a mixture of parental car rides soundtracked by Irani heavy-hitters such as Googoosh and Shajarian, and anthems by the likes of AQUA and Missy Elliot in her headphones. As the bluetooth revolution took over, AZADI’s desire to find the rarest sounds grew, and she would spend hours during school trading and collecting mp3’s of anything from UK funky to post-punk to emo on her Sony Ericsson. Both sonically and visually she operates at the intersections of her musical and cultural backgrounds, striving to make a home for herself somewhere in the in-between.

Khari Lucas is a South Carolina based artist/producer who writes, performs and DJs under the moniker Contour. Moving between solo and four-piece formats for the project, he works across various mediums to present his creative vision. Current musical output exists somewhere between jazz, soul, and psych rock, but he considers himself a student of all areas of music, and intends to cover as much sonic and thematic ground as possible over his career.

Hailing from the banlieues of Paris, Crystallmess operates from a place of generosity. She’s a DJ, producer, writer and mixed media artist, keen to shed a light on past and present subcultures. Growing up in a French Caribbean and African household and having to sneak out to be a club kid has directly informed her approach as DJ and producer, and her eclectic yet cohesive style goes from abrasive zouk and dancehall to afro-trance and Detroit techno. As a mixed media artist, she tackles the subjects of club culture, colonial alienation and alternative temporalities. Last December; she self-released her first EP Mere Noises, which oscillated between raw rave energy, dark dancehall and melancholic ambient. She will be releasing more music later in 2019, stay tuned.

LA Timpa, a Nigerian born producer and songwriter, immigrated to Canada as a child. He spent his formative years shaping his craft, surrounded by farmland, religion and static suburbia. As foreign seasons drifted by, endless hours were dedicated to dreaming up sounds, characters, art and films. In 2015, LA Timpa began diving into field recordings he’d collect from aimless walks with a tape recorder. Everything from a cat meowing to a spoon falling was recorded and then sampled into his productions. The same approach was applied to soundtrack visuals he would record with a video camera. This was the beginning of the project. In 2016, LA Timpa released his debut EP Animal on Toronto label Slow Release. Animal garnered critical acclaim and was featured on Pitchfork, i-D, The Fader and more.

Lecx Stacy is a multifaceted songwriter, producer, and visual artist hailing from sunny Amber Sky, California. Lecx’s creations are distinct representations of personal escapism and conceptual worldbuilding, often conceived in daydreams and bouts of deep introspection. These compositions are informed by his many diverse influences, which include a wide-ranging musical palette spanning from My Chemical Romance & Bad Brains to OutKast & Wu-Tang, 80’s arcade games, and the ever expanding narratives & universes of comic books. With his upcoming “Face Plants” EP, Lecx is diving deep within his psyche to construct a whole musical universe of his own…

Lucinda Chua is a cellist and singer-songwriter based in London. Her debut single ‘Somebody Who’ was accompanied by the release of Strings Mixtape, a 30 minute mix, seamlessly weaving together ambient pop, introverted hip hop and iconic classical works, all underscored by her own string arrangements, instrumental compositions and collaborative sessions.

Growing up listening to drum & bass, jungle and dubstep, re:ni's sets join the dots between her dub-wise influences and contemporary bass-driven techno, electro and breakbeat. Having ticked Panorama Bar, Dekmantel and De School off the list in 2019 she brings a UK sensibility to techno line-ups, traversing across tempos with a record bag stacked full of deep basslines and broken rhythms. Alongside Laksa re:ni hosts 're:lax', a monthly NTS show and south London party where she is resident.