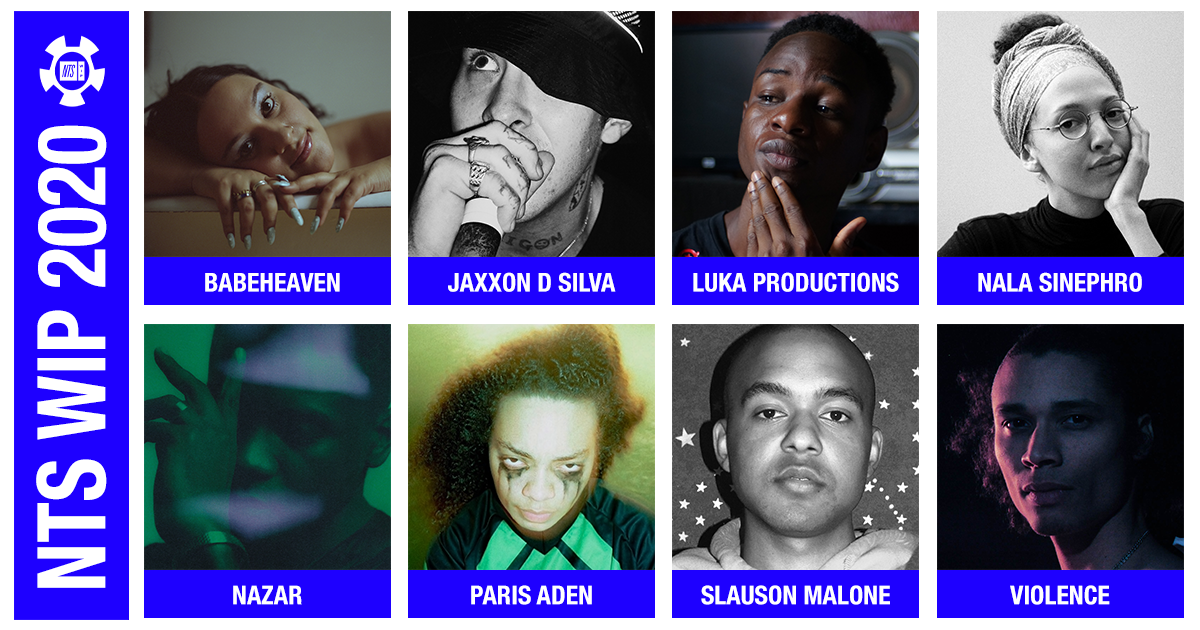 After thousands of applications and months of careful consideration, we are proud to announce the NTS WIP artists for 2020. This year NTS and selected audio and cultural partners will be supporting 7 musicians and 1 band onto the next stages of their careers. NTS WIP will be providing studio time, mentoring, performance opportunities and audio equipment to this year's selection. Watch this space for new music, radio shows, and live events from these amazing artists.

Forged around a friendship between Nancy Andersen and Jamie Travis, Babeheaven are a London-based group with a soulful approach to songwriting. After several single releases, Babeheaven are currently writing their debut album. Their sound pairs hypnotic trip-hop with confessional lyrics about “friendships, family, losing touch, finding touch and working out where you stand with people.”

Jaxxon D. Silva has fast established himself as a promising new artist to watch, and followed the release of his intoxicating Open to Closure album last year with a support slot on Skepta’s European tour. Silva’s sound reflects his background (born in LA, now based in London) with a signature style that blends strained grungy vocals, rap, and melancholic guitar loops.

Luka Productions is the solo project of Malian producer and vocalist Luka Guindo. Initiated as an outlet to create West African new age music, his production methods fuse the contemporary rap dynamics with the sounds of the rich cultural heritage of Manding music. His latest album titled Falaw (released via Sahel Sounds), which translates as ‘Orphans’, combines electronic experimentation and folk tradition.

A composer, producer and musician based in London, Nala Sinephro is currently preparing her debut album for release in 2020. Backed by a small ensemble, the Caribbean-Belgian musician plays a pedal harp through modular and analogue synths to beguiling effect. Nala Sinephro’s profile has risen in recent months following performances as part of the celebrated jazz night Steam Down, and an appearance in The Guardian’s artists to watch in 2020.

Nazar is a 26-year-old producer who grew up in Belgium, before returning to native Angola in his late teens, after the civil war. Now based in Manchester, Nazar categorises his music as ‘rough kuduro’, a wild reimagination of Angolan dance music weaponised for the 21st century. Both his 2018 EP, Enclave, and forthcoming album released via Hyperdub, warp the typically upbeat style of kuduro to expose the uglier side of Nazar’s experiences.

Coming from the “Land of The Trill”, the Port Arthur producer Paris Aden has made a new lane for herself. Her productions have a fiercely original experimental edge, and while she’s a go-to producer for names like Lil Pump and Bbymutha, she’s as talented on the mic as behind the engineering desk, producing 8-bit pop and crafting wild pop edits.

LA based, Slauson Malone is a multi-disciplinary artist whose works explore the intersections of popular music and visual art. He released his first solo album in 2019 titled A Quiet Farwell, 2016–2018. Malone’s work approaches sampling like the art of collage, assembling disparate sources of varied origins and fidelities into a meditative audio commentary.

VIOLENCE is the solo project of visual artist and multi-instrumentalist Olin Caprison, originally from Baltimore, now based in NYC. With releases on NON Worldwide, Total Freedom’s Blasting Voice compilation and Mykki Blanco’s Dogfood Music Group, VIOLENCE’s releases are known for dissecting genres, with elements of juke, goth, grime and industrial working together to untangle themes of political violence, hypermasculinity and archetypal memory.

NTS Work In Progress is co-funded by the Arts Council England with Carhartt WIP, alongside a range of audio and cultural partners.