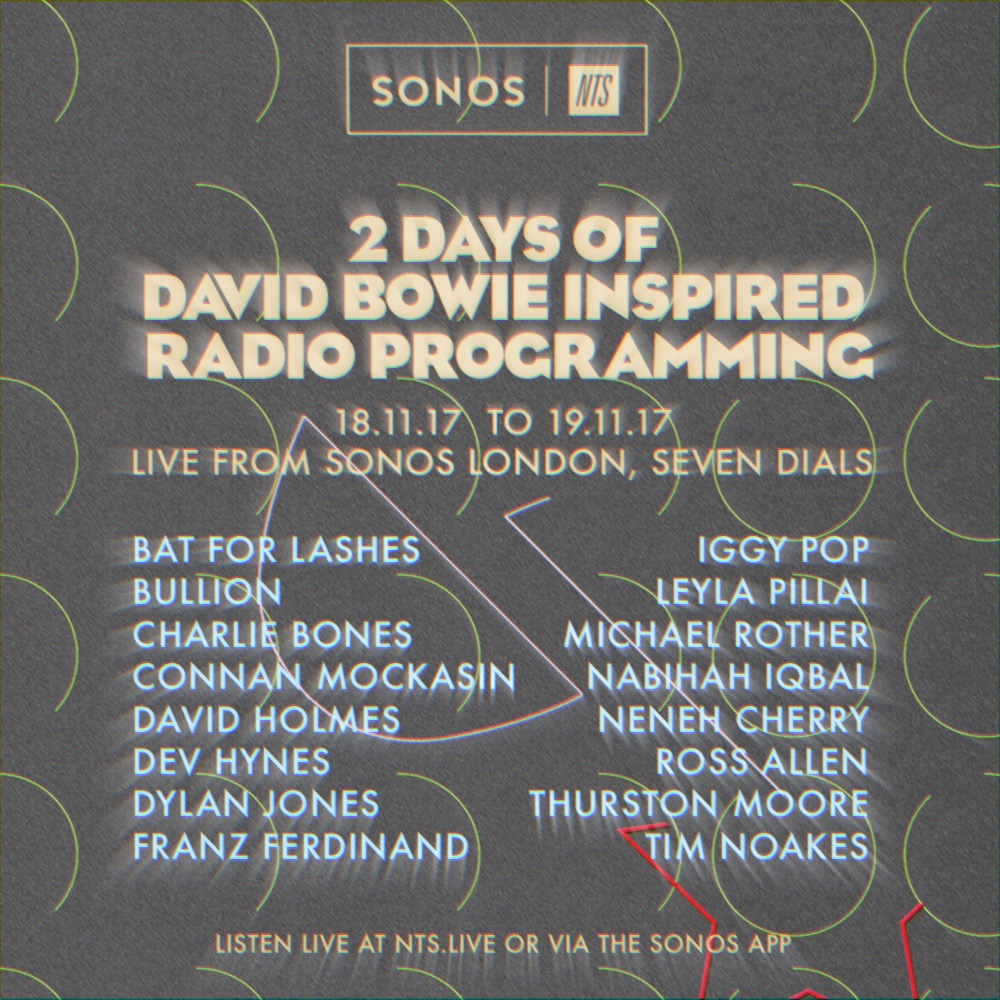 NTS and Sonos present a full weekend of programming celebrating the everlasting influence of David Bowie, broadcasting direct from the new Sonos London store on Seven Dials in Covent Garden. Tune in via NTS' Channel 2 all day on Saturday and Sunday, 18th and 19th November. Hosting shows over the weekend will be a range of NTS residents and special guests, including Dev Hynes, Iggy Pop, Thurston Moore, Connan Mockasin, Neneh Cherry and many more...

See below for a full listing of the weekend. For those unable to tune in live, all shows will be archived on the NTS website.

Dylan Jones (12:00-13:00)
Dylan Jones, perhaps best known as editor of GQ magazine, will be kicking off the two-day broadcast by reading excerpts of interviews from his recent oral history, titled David Bowie: A Life.

Ross Allen (14:00-16:00)
NTS stalwart, music buff and all around good guy Ross Allen will be examining the R&B and soul influences in Bowie's work during the mid-seventies, particularly around the album 'Young Americans'.

Michael Rother (17:00-18:00)
The founding member of legendary krautrock band, Neu!, Michael Rother will be using his extensive back catalogue to illustrate the pull East Berlin had on David Bowie and his interaction with the krautrock and kosmische scene.

Leyla Pillai (19:00-20:00)
Leyla is the genius behind the longstanding NTS show 'Who's That Girl'. Expect a deep dive into Bowie's psyche as Leyla paints an expressive and illuminating audio-portrait of the iconic star.

Franz Ferdinand (20:00-21:00)
The Glaswegian indie outfit will be compiling their own hour-long tribute to the Brixton-born songwriter.

Iggy Pop (21:00-22:00)
As a long-time friend and collaborator of David Bowie, Iggy Pop will take listeners on an intimate journey through his songs and the influences that helped create them.

Bat For Lashes (22:00-23:00)
Natasha Khan a.k.a Bat For Lashes will be looking at David Bowie as a visual artist, actor and musician, by revisiting the soundtracks of the films in which he took part as well as other inspirational cues...

Bullion (23:00-00:00)
"Pop, not slop!" Nathan Jenkins, a.k.a Bullion, is the man behind London label DEEK Recordings. For his NTS x Sonos show Nathan will be picking apart Bowie's '77 album, Heroes, and exploring his collaborative relationship with Brian Eno.

Charlie Bones (12:00-14:00)
The NTS breakfast host Charlie 'Eagle' Bones will be playing a two-hour tribute to the great David Bowie, guiding listeners through a selection of his favourite Bowie and Bowie-adjacent records. Join in the fun from noon on Sunday, live in the NTS chatroom.

Neneh Cherry (14:00-15:00)
The Swedish songwriter and artist Neneh Cherry will be playing a varied selection of obscure and rare David Bowie covers from all corners of the globe.

Thurston Moore (15:00-16:00)
After sharing a stage with Bowie for his fiftieth birthday in Sonic Youth, Thurston Moore will be sharing his own experience of the pop icon and champion of the avant-garde.

Connan Mockasin (16:00-17:00)
Connan Mockasin will be sharing his formative Bowie experiences through his love of the 1996 Australia-only CD compilation, London Boy, which Mockasin listened to repeatedly on first moving to London.

David Holmes (17:00-18:00)
The acclaimed composer and NTS hosts David Holmes will be looking at David Bowie the magpie - looking closesly at the influences he picked up and reinterpreted througout his career.